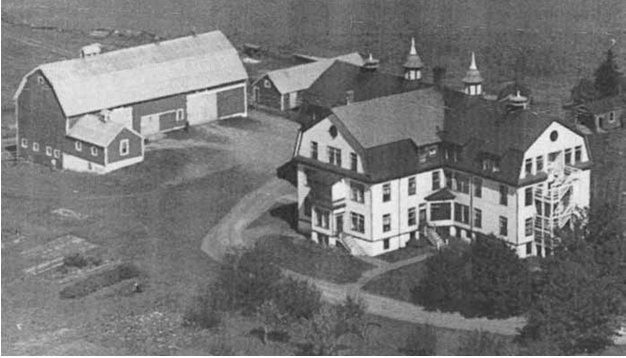 An Article by Margaret Wagstaff.


As I was growing up, now and then I heard poor farms mentioned (usually as a dire warning to maintain a good work ethic). A picture of the Colchester County Home was posted on the Colchester Historeum’s Facebook page and had attracted a lot of attention. I mentioned to a friend about seeing the picture and “what a large, beautiful building it was”. My friend then began telling me that he grew up across the street from the site. At that time the road went by the name Poor Farm Road (now Mountain Lee Road). Not knowing much about the Poor Farm in the first place, he told me just enough to pique my interest. It was then that I began my research on what was once called the Poor Farm.

In 1896, the Town of Truro built a Poor Farm on Willow Street to “care for the poor, the aged, the infirm, and indeed anyone who could not survive on their own in the community.”[1]  This was the traditional English way. At that time there was 32 poor houses in Nova Scotia. The Willow Street home was closed in 1928 when better social programs were beginning to be implemented. The building is still there (next to the former Acadian Lines bus station) and now houses several apartments.

Colchester County built the more elaborate home, pictured here, in 1908. This home was built in North River, across from the present day North River Elementary School. It was considered to be “a place to keep our poor, and to humanely care for our harmless insane”.[2] It had also became a dumping ground for a large number of “harmless” mental patients from the more expensive accommodation and overcrowded Dartmouth mental hospital. Society didn’t know what to do with the aged who required care, tramps and vagrants, unwed mothers, homeless, Orphaned and severely handicapped children.[3] The solution was the poor farm.

Other names for the County Home were The Institution for the Insane and Poor, Home of the Poor, Colchester County Asylum, The Home, County Home, Home for Old People, and the Bug House.[4] These names reflect the way people thought in that time.

The staff consisted of a superintendent and matron (usually a married couple), cook, cook’s helper, male attendant, nurse, farm manager, seamstress, male night watchman, and female helper and their families. They were housed in one whole wing of the building. Reginald Butcher and his wife were superintendents for over 27 years at the Colchester County Home. Thirty residents of the County Home were bedridden. The residents, who were able, were expected to work on the farm. The Farm supplied hay, grain, potatoes, carrots, apples, cattle, pigs, and chickens - most of the food needed to keep the residents fed.

Often inmates (or paupers) were sold at auction to the lowest bidder to be workers in return for their bed and board. Since this was less expensive option than the home, the government would sometimes pay a small stipend for their keep. The winning bidder agreed to take the lowest amount.

When someone died, the men housed there would carry the bodies down to a cold room in the basement. If the bodies were not claimed by family, they were often donated to scientific research in Halifax. Burials were done on site at most poor farms, with the graves often unmarked. Records of those buried behind the County Home in North River were lost in a fire that destroyed the beautiful building in 1954. The fire left over 105 inmates (including six children), the staff and their families’ homeless. Unfortunately, there was a man’s life lost.[5]

The property was bought later by William A. Sutherland in 1955, and is still in the family. Mr. Sutherland cleaned up the burial site in 2001, and put up a monument to those buried and forgotten there. 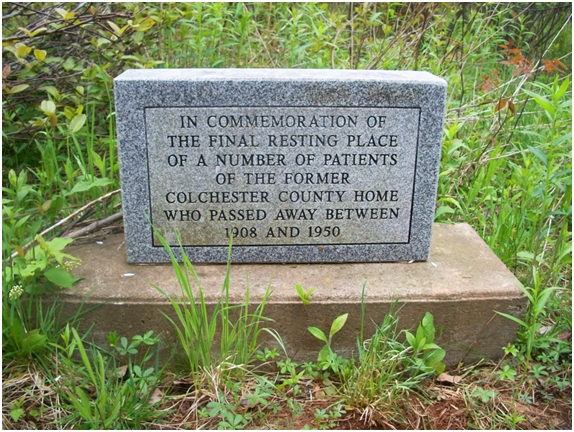